In 2014, 37 new coot were ringed at Killingworth Lake. A number of local recoveries were also reported with colour ringed birds sighted at:

An exceptional recovery was generated by the last Coot ringed in 2014. B6V – GR81336 was ringed at Killingworth on 28/12/2014. B6V was subsequently photographed and videoed by Lars Lindgren and Jesper Brinkmann at Gentofte Lake in Denmark, a movement of 895km East.

Members of the Northumbria Ringing Group have ringed hand caught coot, geese and ducks at local ponds and lakes for many years. In 2011 we began adding engraved darvic colour rings to Coot as part of a larger Coot study initiated in North West England. The rings are white, with three black alpha-numeric characters and are normally added to the bird’s left leg.

To date, over 100 Coot have been darviced in North East England. Several local movements have been recorded as well as the recovery of a coot from Southport on Merseyside to Killingworth lake and a bird from Killingworth lake recovered in Sheffield. 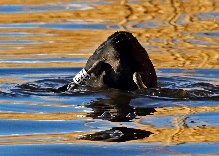 If you come across any colour ringed coot I’d be very grateful to hear of any sightings, please email andyrickeard@hotmail.com.

The project was also mentioned in a coot colour ringing update: Coot_newsletter.