Following a successful initiative by some conservation bodies who reversed the decline in the Barn Owl population by providing nest boxes countrywide, the Ministry of Defence, the Northumberland National Park Authority and members of the Northumbria Ringing Group embarked upon a programme, commencing in 2003, of producing nest boxes for Barn Owls and installing them at potential sites in various locations in Redesdale. With the cooperation of landowners and tenants they were sited either in trees but more preferably inside buildings. By 2008 26 boxes had been located and in the years up to 2019 23 boxes had attracted breeding 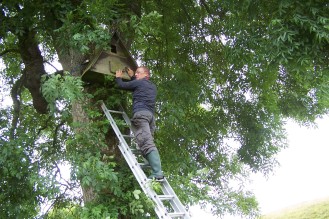 pairs of Barn Owls, although not all in the same year. Members of the Northumbria Ringing Group, who have the appropriate Schedule One licence issued by Natural England, visit all of the nests to monitor productivity (the number of young fledging per pair) and to ring the nestlings using rings issued by the British Trust for Ornithology. Since 2003 over 400 nestling have been ringed and subsequent recoveries (birds either recaptured by other ringers or those less fortunate to be found dead) have moved up to 80kms from where they fledged and have been found up to 8 years after ringing. 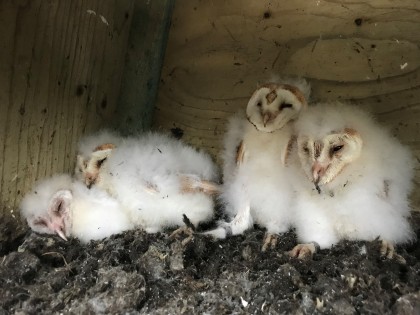 Chicks in a nest box

A chick being ringed

Barn Owl survival is not good in very cold winters and the successive winters of 2008 – 2011 were a disaster for the region’s population. Prolonged snow cover prevented them from finding food, which in Redesdale is largely field voles (confirmed by analysis of regurgitated pellets at nest sites), and subsequent mortality was high. In that period of time over 60 ringed birds were found dead or dying through starvation with a high proportion being found in farm buildings by Redesdale tenants. However it was not all bad news because some of the lucky or more experienced birds that survived those winters have gone on to produce more offspring, including two broods in some years.

During the 2018 and 2019 breeding seasons the Northumbria Ringing Group assessed nest box condition and availability throughout Redesdale and concluded that there was a need to replace some weathered boxes and provide more at new sites. The Revitalising Redesdale Community Heritage Fund funded the production of 10 boxes over the 2019/2020 winter.

Tawny Owls most often nest in holes in trees or in nest boxes sited in suitable woodland. Their principle prey species are wood mice and voles. There are many suitable woods in Redesdale but most are void of natural holes. The Tawny Owl is on the UK Amber List of species of Conservation Concern and in an attempt to assess its current status the British Trust for Ornithology arranged a survey in the spring of 2019 asking volunteers to record the location of calling birds throughout the country.

As part of the response the Northumbria Ringing Group launched a pilot study in the early spring of 2019 and 6 nest boxes were sited in suitable woodland in Redesdale. We were more than surprised to find that 4 were immediately occupied by breeding pairs of Tawny Owls and all were successful in fledging young. Nest boxes provide a relatively secure nest site, which results in better productivity, and with some individuals known to live for as long as 20 years they have the potential of producing 40 – 50 offspring during a lifetime. 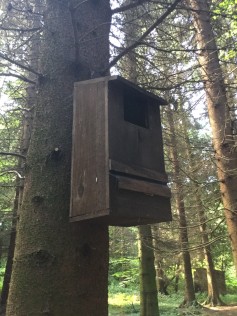 With suitable natural sites at a premium there was clearly a need to produce more nest boxes in an attempt to establish a viable population throughout Redesdale, which would link with the already long established, healthy population in the nearby Border Forests. The Revitalising Redesdale Community Heritage Fund provided funding for the production of 15 boxes over the 2019/2020 winter. They were manufactured to a high quality specification by a local joiner and siting commenced in early November.

All boxes were in place by the end of February 2020.

As with Barn Owl boxes monitoring will commence in early spring 2020 and as part of an education programme landowners and tenants will be invited to attend nest visits together with interested parties where appropriate. The end of season results will be reported on the web site as well as in visual aid presentations at various locations (e.g. village halls) in the area.

The Revitalising Redesdale Community Heritage Fund have also supported the construction of nest boxes for other species of National Conservation Concern (e.g. Swifts and Flycatchers) for siting in early spring and they will be monitored in the same way as described above.