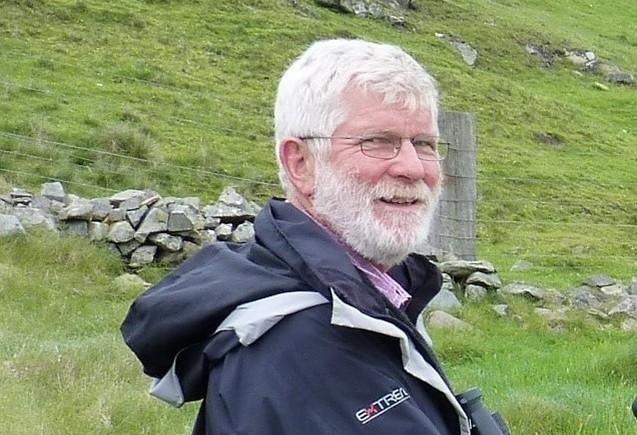 Eric died on 16th February 2017 aged 69, having collapsed suddenly a few days earlier. He was a baby-boomer, born in 1947 and his late mother told me Eric was their miracle baby, arriving late in their life. He gave them much to be proud of, passing his 11+ and going to the prestigious Gosforth Grammar School, eventually becoming Head Boy and winning a scholarship to study Geography at Cambridge. He also became a very successful sportsman playing rugby for England at schoolboy level.

Somewhere along the line he became passionate about wildlife, especially birds. In his mid-teens, he joined the newly formed Tyneside Bird Club, which was then an amazing hotbed of young and talented ornithologists. Bryan Galloway recalls a red-haired persistent 15-year-old pestering him to start ringing birds with the Northumbria Ringing Group!

He became a close friend with Brian Little who became his mentor and inculcated a deep interest in birds of prey, especially the Merlin, which remained Eric’s special bird for the rest of his life. Eric also worked a couple of summers on the Farne Islands and showed huge interest in the research being carried out there.

I met Eric and Brian on Fair Isle and I quickly joined the ringing group, becoming a Hauxley regular. A year later Eric had graduated and decided to do a PGCE at my college in Durham. What a year we had! I had inherited an ancient Ford Prefect from my grandad so we went all over ringing birds,

particularly at Hauxley. Along with all his other talents Eric had a lovely tenor voice and we found I could harmonise with him. We spent a lot of time singing in Folk Clubs across Northumberland, never paid, but getting free beer which was just as good really! On one occasion, we gave a lecture to the Tyneside Bird Club which was illustrated by songs rather than slides much to the astonishment of the audience. Another talent he had was to eat vast quantities of food quickly and it was a bit disconcerting to be eating your own sausages and find Eric’s haunted face watching you in case you didn’t want them all! The other thing I grew to respect at this time was Eric’s meticulous recording and Diary keeping. He could go back and tell you exactly what we had seen on what date and where – amazing. One event that year sticks in my mind. He decided he wanted to learn how to drive, so in a quiet moment whilst ringing Reed Buntings at Alnmouth I started to teach him. All was going well until I realised I hadn’t told him how to stop. Trying to find the brake pedal he hit the accelerator and we ended half way up a sand dune. He went to a driving school after that.

Eric started teaching at Heaton School in Newcastle and also ran a couple of WEA classes. In late 1971 he married Christine but, just four months after the wedding, they were separated because Eric gave up teaching to be the Assistant Warden at Fair Isle Bird Observatory. Lots of stories and one of my favourites was when I visited in August: as we were driving a Heligoland trap I saw a large rail fly into the funnel, but as we reached the end there was no sign of it. Eric remembered a drain pipe under the trap and he reached from one end and I from the other, clasping hands in the middle, but nothing. Then he jerked and said “something’s gone up my sleeve!” and like a magician he produced a rare Spotted Crake with a flourish. By this time, Chris had re-joined him and they must have been pleased to see each other because 9 months later Terry was born! Eric returned to teaching and quickly rose to be a Head of Department at Blyth School in Northumberland. Terry was followed two years later by Sally and the family was complete.

At this time his contribution to birding rose significantly and he became a key figure in Northumberland and Tyneside. He was the co-author in 1970 of the ground-breaking ‘Birds in Northumbria’ which subsequently became the annual county bird report and then co-authored the 3 volumes of ‘Northumberland’s Birds’ published by the Natural History Society of Northumbria between 1978 and 1983 . Also in the 1970’s the Merlin Study in Northumberland really took off, mostly driven by Eric who even went into local museum archives to find where eggs had been collected up to 100 years before, then checked those sites and found many of them still occupied! This typified his enthusiastic and energetic yet meticulous approach to things. It led in 1977 to the publication in British Birds of a paper by Eric, Brian Little and Ian Newton on the breeding biology of the Merlin which is still regularly cited in research publications. That study continues to this day.

In 1981 he made the amazingly brave decision to give up teaching and to move away from Northumberland where he was firmly established. He took his young family to Orkney and became the RSPB’s Area Officer, a job he loved and carried out superbly for 31 years.

It is difficult to encompass the scope of his achievements on Orkney. By 2012, 25% of the land area of these beautiful islands was RSPB reserve and he managed this with aplomb. He carried out and promoted very effectively the protection of and research into particular species such as Merlin, Hen Harrier 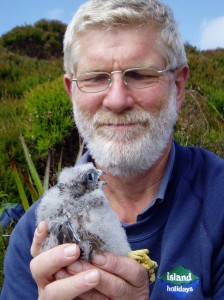 and Corncrake. To this he brought his own special understanding of the importance of the wider habitat of which he developed a deep and profound knowledge. He established a national reputation for his botanical expertise. Of course, he had to be adept at the public relations side, the public speaking at which he was so good and the diplomacy which he had to learn, transforming himself from his fiery youth. At times this got very difficult, with huge controversy about increased land ownership by the RSPB, much of it directed very personally at Eric (they burned effigies of him on Hoy!). It says much that by the time he retired he was universally respected by those who had earlier opposed him. If this was not enough he played a leading role in the local birding community including the production of Orkney Bird Reports, monthly bulletins and Orcadian newspaper articles. There can be no doubt that he was deeply passionate about the place.

Increasingly he was pulled into roles of national importance and, such was his quiet charisma, charm, natural authority and deep conscientiousness, he nearly always ended up as Chairman. For instance, as Chairman of the BOU Rarities Committee he was the guardian of the fabled ‘British List’ and, until just a few weeks ago, he was Chairman of the Trustees of Fair Isle Bird Observatory, the place that perhaps he loved more than anywhere.

Eric gave up teaching in schools but never gave up being a teacher. He was a natural, able to give clear and straightforward explanations of sometimes quite complex science. One friend said to me “he enhanced your day and even the most mundane of walks became an informative adventure”. Inevitably he became a popular and successful leader of tours both in Orkney and abroad in places as widespread as Alaska and Antarctica.

Although he had developed these wider experiences he never lost his deep love of Northumberland and returned whenever he could. His very extensive library at home had every book ever published on the birds of the county and I am told that he maintained his membership of the bird club to the last. Those who recently built the concrete plinth for the new hut at Hauxley and inscribed his initials in the surface paid him a tribute that he would have appreciated enormously.

Eric was a devoted family man, above all he loved walking with them and his dogs in wild places. When his first wife, Christine, died in 2001 he was devastated but worked hard to support his children Terry and Sally. Then in 2006 he found a soul mate in Aileen and it was good to see him happy and relaxed again. Our condolences and hearts go out to them and to their families. Like them, we will miss him terribly.