Since the Summer of 2003, members of the Northumbria Ringing Group (NRG) have ringed Kittiwake pulli, and adult birds at the purpose built nesting tower in Gateshead. The ringing is kindly facilitated by Gateshead Council who provide access to the colony via a cherrypicker.

The initial brief was to investigate if birds displaced from the Baltic Flour Mill, as it was developed as an Arts Centre, were using the tower. With nine birds originally ringed at “The Baltic” subsequently recorded at the tower early in the study, this successful displacement appeared to be proven. The study continues to monitor productivity at the site and any subsequent dispersal.

Recoveries of birds ringed at the tower filter through occasionally with mainly local recoveries including birds found at Blyth, Druridge Bay and elsewhere in the colony along the Tyne. In 2011, however, I received news of our first recovery from Northern France and recoveries from the breeding colony at Boulogne Sur Mer have continued to come through. There are now four Kittiwakes ringed as chicks on the Gateshead tower breeding in the French colony.

The colony in Boulogne started to establish itself early in the 2000’s and is estimated to hold in excess of 630 breeding pairs. The birds are mainly breeding on ledges on buildings around the harbour area. You can have a look for yourself using Google Street View if you search for Boulevard Napoleon, Boulogne-Sur-Mer. The Google photos were obviously taken during the breeding season. 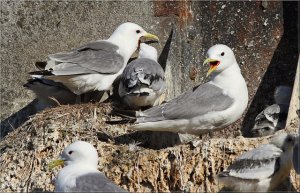 Jean-Michel Sauvage monitors the colony closely and we’re very grateful to him for providing details of Kittiwake recoveries. He has recorded and submitted an extensive range of recoveries for a number of different seabird species, many of which can be seen at his Flickr Site: https://www.flickr.com/photos/wwwflickrcom-photos-la-mouette/

I was intrigued that as many as four birds from the Tyne were in Boulogne, and this year another NRG ringed Kittiwake from Howick, on the Northumberland coast, was located by Jean Michel. I wanted to know where the other birds at the colony came from. He’s kindly shared details of the origins of the ringed breeding birds he has found and I’ve listed them below. Most of the recovered Kittiwakes were ringed around the British Isles, with two birds from Sweden also recorded:

With thanks to Jean-Michel for his permission to use his photographs and information.