The British Trust for Ornithology (BTO) Constant Effort Study (CES) commenced in 1983 and was set up to monitor nationwide breeding passerine population changes in a variety of habitats. Of particular interest was the long term study of adult and juvenile survival and the annual variation in productivity.

The methodology involves annual catching and ringing of breeding passerines during the period 1st May to 31st August. The same length of nets are erected for the same length of time on 12 evenly spaced visits.

The Hauxley study commenced in 2002 and focussed on the reed beds, alder and willow carr and thorn scrub area on the south side of the Reserve. Eight mist net locations were selected and a total of 350 feet of netting is employed over a period of 6 hours. 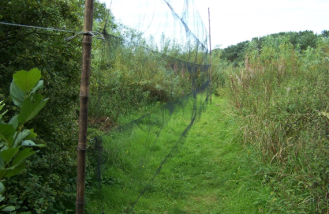 Fifty eight species have been handled at Hauxley since the project started and 28 are considered to be breeding. The number of individuals caught each year have varied between 203 and 421. The year by year variations in numbers of adults and juveniles are correlated. The number of adults gives an indication of the breeding population and the ratio of the number of juveniles to adults provides an indication of the variations in productivity. Over 4,800 individuals have been handled since 2002.

The Willow Warbler is the most numerous species. We have caught 246 adults and 758 juveniles. It has declined quite dramatically in some southern counties in the last 10 years but conversely the numbers have increased in northern Britain, especially in Scotland. The numbers of adults have steadily declined at Hauxley. One adult survivor, ringed as a male in 2002 returned to breed in 2003, 2004, 2005 and 2006.

The Sedge Warbler is also a significant visitor. We have caught 421 adults and 192 juveniles. There was a sharp decline in the adult population in 2008 but the numbers have been fairly stable since that time. We dont really understand why we catch comparatively few juveniles but it could indicate that they quickly migrate south soon after fledging or that they suffer predation from ground predators.

Over the 17 years of the study there has been an increase in numbers of Chiffchaffs, Reed Warblers, Blackcaps and Wrens, and remarkably so of Bullfinches, which apart from 1 in 2002, were absent until 2014. Chiffchaffs and Wrens were particularly productive in 2017.There has been a decline in Song Thrushes, Chaffinches and Reed Buntings, as well as in Willow and Sedge Warblers, whilst the numbers of Blackbirds,
Robins and Dunnocks have been fairly constant.

The most productive years for all species were 2006, 2009, 2014, 2018 and 2019. The least productive were 2004 and 2015. The reasons for change are not clearly understood but can be influenced by such factors as climate variation, habitat change, availablity of food
and secure nest sites, adult and juvenile survival, predation, disease etc.

The coastal location of Hauxley Reserve is such that it often attracts uncommon or rare migrants and catching one gives a bit of an adrenalin rush. Examples include Marsh, Barred, Greenish, Arctic and Western Bonelli’s Warblers, Common Rosefinch, Black Redstart and juvenile Cuckoos. They do not contribute much to CES statistics but it does demonstrate that the habitat on the Reserve provides an important refuge for tired long distant migrants.

Recatching ringed birds is an important part of the project especially during subsequent visits and there have been numerous on site retraps plus a few at more distant locations. Some examples are listed at the end of the report. 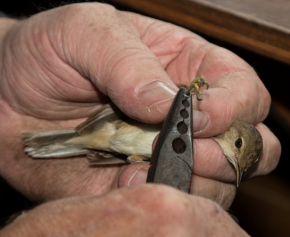 Recatching individuals of most species in the same or subsequent years is a regular occurrence and it provides an indication of survival. It is not uncommon to recatch the more resident species such as Great, Blue and Long tailed Tits up to 4 years after ringing but particularly unusual was a Dunnock recaught after 6 years and a Blackbird found dead after 8 years.

The handling of returning long distant migrants, including the trans Saharan Willow, Reed and Sedge Warblers, is especially rewarding and earlier in the report we quoted an example of a Willow Warbler returning to breed in each of 4 subsequent years after first ringing in 2002. Additionally we have examples of different Reed Warblers and Sedge Warblers returning to breed in 3 and 4 subsequent years after ringing.

These long distant migrants use staging posts elsewhere in the south of the UK when they arrive in the spring or prior to departure in the autumn and Hauxley birds have been caught in Kent, Sussex, Cambridgeshire, Suffolk and South Wales on their migrations. There are similar sites in France and Portugal. The following maps show examples of routes taken by 2 different Reed Warblers in the autumn. 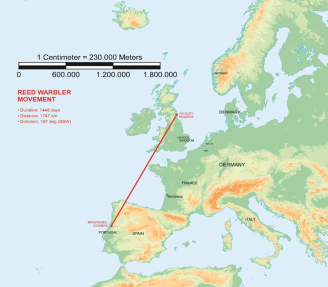 Most British Chiffchaffs spend the winter in France and Iberia and the following map shows the movement of a bird ringed at Hauxley in August and recaught in France in late October in the same year. 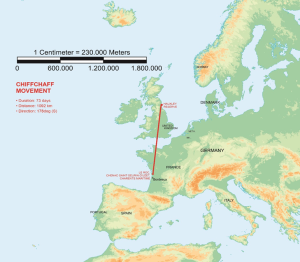 The Northumbria Ringing Group is grateful to the Northumberland Wildlife Trust for allowing us to use the site, especially so to Alex Lister and his staff for arranging access, allocating the Tern hide as a data processing base and arranging for volunteers to maintain the mist net rides.

As the study continues the BTO, who correlate data from some 150 other sites in the UK, will acquire a better understanding of the population dynamics of our commoner breeding passerines and the valued results at Hauxley are helping with the long term management plans on the site.

Bryan Galloway and Michael Holmes
(Ten other members have been involved with the project including Alan Johnston, Alan Hart, Ian Kerr, Paul Galloway and Sophie Webster).