BY IAN KERR
The first half century of the group was celebrated in great style with a party for more than 60 members and guests at Gosforth Civic Hall, Newcastle, on October 6th 2013. 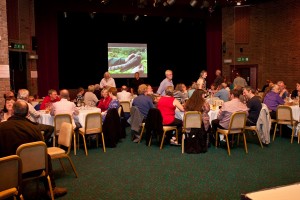 The get-together enabled guests to greet old friends and to catch up on family gossip and talk over ringing and birding in general and tell many a tale of deeds past, not just in Northumberland but across the rest of Britain and other parts of the world. Not to mention talk about expanding waistlines, white hair, or lack of it!  It was wonderful to see so many old friends, some of whom had travelled long distances. Eric Meek made the trip south from Orkney, Ian Newton arrived from Lincolnshire, Dick Temple and John Ginnever from Yorkshire, Alan Heavisides and Ian Poxton from Edinburgh and Chris Ward from west Cumbria.  Being an event for ringers, the bar did a brisk trade and then after an hour of general socialising the company settled down and enjoyed a pleasant meal before the evening’s main events. 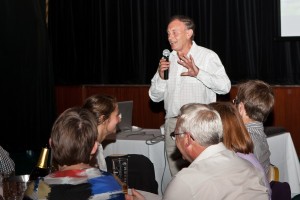 Brian Little gave the welcoming address, even managing, to general hilarity and amazement, to keeping to his allotted slot of five minutes. Ian Newton followed, not so much in his role as chairman of the BTO but more as a long-standing friend, field worker and great supporter of the group. He recalled how his constant requests for data always met with an enthusiastic response and had greatly helped with publications such as his landmark Poyser title The Sparrowhawk. 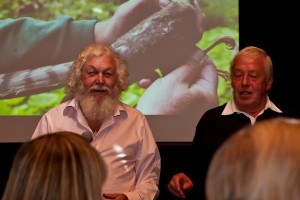 The main presentation was given by Bryan Galloway. The audience were soon in stitches as each old picture appeared from the early days of the group. Hair styles ranged from National Service short-back-and sides to Sixties and Seventies shoulder-length hippy. Clothing was pretty amazing too, more ex-army than Berghaus, Regatta, Craghopper and other modern brands. And was the Austin A35 van, the early workhorse of the group, really that small? Was Eric Meek’s hair really that brilliant red?

Bryan led the audience through the building of the first Heligoland trap and confessed that some of the timber was rather dubiously acquired from sources best left vague. Then there was Brian, short black hair in those days, one hand casually in pocket, taking the first bird from the catching box. The erection of the first ringing hut, donated by the local opencast mining firm, followed along with slides showing the ‘green oasis’ status of Hauxley wood and allotments, surrounded by a opencast moonscape. No wonder the birds loved it.
Away from Hauxley, other old slides showed members, many of them looking incredibly youthful, in other ringing activities, some stranger than others. There was Goosander netting on various rivers, nest box work, the building of artificial nests for Merlins (failure), Long-eared Owls (successful even when age and weather left just the wire netting base) and the planting with grass and heather of bare cliff ledges for Peregrine (very successful). There was also the lugging of incredibly heavy old wooden ladders over miles of moorland to reach Kestrels, something I remember only too well!
In less than an hour – although he’d promised 15 minutes – Bryan managed to give an illustrated history spanning the entire 50 years of the group. 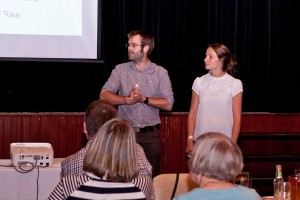 A though-provoking presentation on the next 50 years followed from two younger members, Phil Bolam and his fiancé Rike Kroener. Questions they posed covered environmental losses to development, less public cash for the countryside in general and climate change and its effects on birds. Would, for example, we lose northern species including Meadow Pipit and Curlew? Would we gain new colonists such as Cetti’s Warblers with perhaps Hoopoe become a regular target for ringers?
On a much lighter note, Rike caused laughter while expressed her frustration during quiet spells at the nets of having to listen to ceaseless talk of that English obsession, cricket, which, coming from Germany, she couldn’t understand. 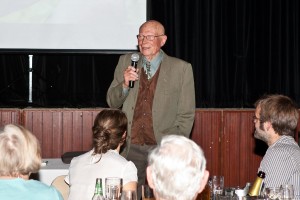 Eric Bird thanked the group for putting on such a splendid event and then entertained, in his own inimitable style, with jokes he claimed he’d inherited from the late Sandy Bankier. Sandy, as everyone who knew him will remember, had an absolutely inexhaustible supply of them. The comment was made by many that, being such a party animal, Sandy would have loved the evening and would have been in and out every conversation.
The raffle was then drawn, appropriately for a ringing group, not from the usual standard cardboard box or bucket but from one of ‘Rufus’ Smith’s skilfully-crafted nest boxes. The main prize, Alan Hart’s superb painting of a cock Merlin, again very appropriate, chasing a couple of Sanderling against a background of the lime kilns and castle on Holy Island, was carried off northwards by Ian Poxton.
Final, by almost midnight, Brian Little thanked everyone for participating in such a wonderfully memorable evening. 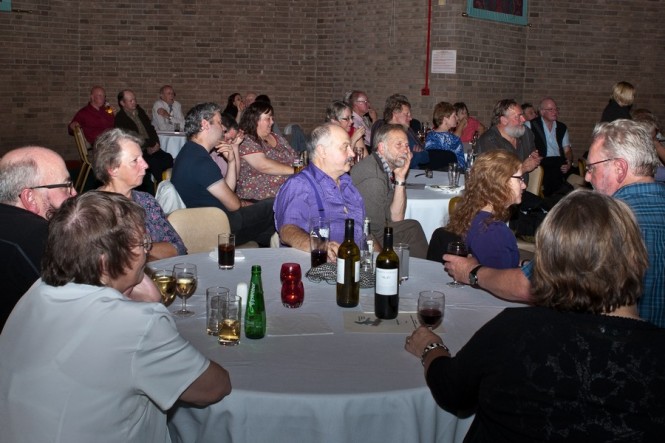