The winter of 2015/16 has seen large amounts of rainfall across much of the UK and Northumberland (inc. Hauxley) has had its fair share!

A day or two before 13th January, I received a phone call from Geoff of the Village to let me know the hut was about to be flooded, in case we had anything of value that needed to be moved! I knew Martin was working a little further up the coast so rang him and asked him to go and have a look as Geoff had also said the gardens and wood were also flooded and that he’d had to canoe the track by A trap to visit his Chickens at the top of the gardens!

Martin went to have a look and sent me a couple of phone pics of the situation! He also removed the ringing logs and the daily log in case of damp damage.

I visited Hauxley on 13th only to find the road between High & Low Hauxley was closed due to flooding! No problems I thought, I’ll put me waders on and go across the back pond. Waders on and a couple of meters over the fence it became clear that waders were not going to be much use – the amount of water in the back pond was like nothing I’d ever seen in nearly 35 years of going to Hauxley! It was even across the road up to the reserve/caravan site. I also found out that I had a leak or two in my waders, so the idea of visiting via the back pond was abandoned!

The back pond from the top of the gardens

I eventually got to the wood via Amble and the view from the car park was staggering! Total flooding!! The images below show the extent of flooding around the wood and gardens. Those plots in the middle of the gardens appeared unscathed (apart from being very boggy), but those plots on the N & S sides of the gardens were badly flooded and in some cases totally under 4’ water!

Wood in front of A trap 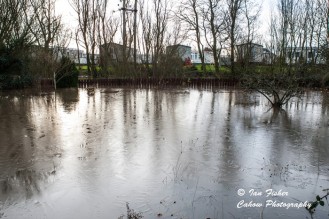 Looking towards B trap 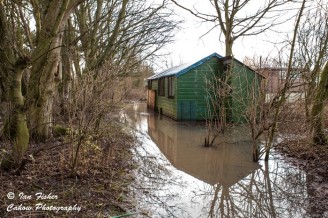 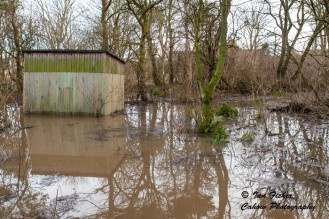 I revisited the Ringing Station late on 6th February to see if the waters had subsided and to see if we’d had any trees down during the recent strong winds. I was quite surprised at how little the waters had dropped and the area of the wood that I could walk through was like walking in soft mud. It is going to take a long long time to dry out!

Wood near B trap

Wood near B trap 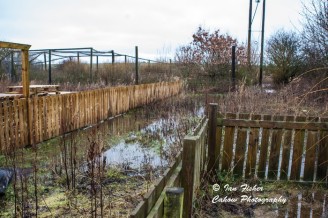