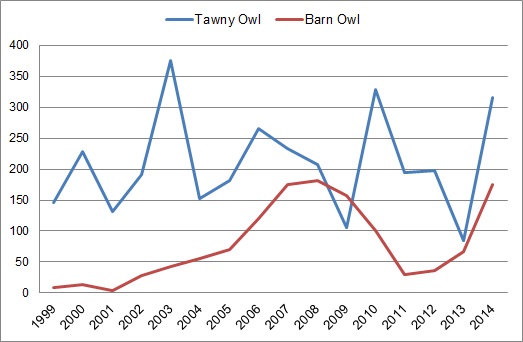 Of 39 pulli waders (45 in 2013), Lapwings (25) were a feature. Seabird effort involved 106 pulli Roseate Terns from Coquet Island and 93 (59 pulli) Kittiwakes from Cullernose. Prolonged searching for Ring Ouzel nests brought a record total of 39 pulli and the 266 Meadow Pipits were mainly on autumn passage. It was a better year at East Chevington reed beds with 208 Sedge and 137 Reed Warblers being ringed there in the late summer/early autumn and it was an incredible year for Chiffchaffs with a record 751 ringed (489 in 2013) whilst Willow Warbler numbers (194) were the lowest since 2007.

Over 2,000 Swallows were ringed at the roost at Lamesley where a record of over 3400 birds were caught in 2012 and 1,172 full grown Blue Tits and 765 full grown Great Tits were record catches for both species.

The four CES sites at Whittle Wood, Hauxley Reserve, Birtley Sewage Works and Lockhaugh were all manned with mixed success.

Michael Holmes communicated electronically with the BTO to ensure that all data was submitted by the end of February. This brought us a rebate of £439 for ‘sensitive’ species ringed in 2013 (we have ‘earned’ £6,633 since 1999). Once again we were grateful for a significant donation from Northumbrian Water.

Recoveries (details in Recovery News) included Osprey to Senegal, an 18 year old Peregrine, Avocet to France, Mediterranean Gulls from Poland and Holland, Black headed Gulls from Denmark, Norway and Germany, Kittiwakes to France, a 21 year old Arctic Tern, Blackbird from Norway and Chiffchaffs to Holland and from Belgium.